For the first time in Classic history, AutoNation will serve as the title sponsor of the event, which hasn’t seen a title sponsor change in over 20 years. The AutoNation Orange Bowl Basketball Classic is scheduled for Saturday, December 18, 2021 at the FLA Live Arena in Sunrise, Fla. Game times and broadcast information will be announced at a later date.

“AutoNation is excited to be the title sponsor of the Orange Bowl Basketball Classic. We’ve enjoyed a long partnership with the Orange Bowl supporting programs like the Orange Bowl Leadership Academy and youth sports. We look forward to expanding our partnership to bring even more community engagement and exciting basketball to South Florida,” said Marc Cannon, AutoNation Executive Vice President and Chief Customer Experience Officer.

The doubleheader, which is the only NCAA Division I basketball to be played in Broward County this year, will once again feature the Florida State Seminoles and the Florida Gators, hosting the Central Florida Knights and the South Florida Bulls, respectively. This marks the first time in the Classic’s 27-year history that all four participating teams are from the state of Florida.

“We are absolutely thrilled to welcome four top-tiered college basketball programs this year, and just as excited to debut a brand-new title sponsor in AutoNation,” said Orange Bowl Committee President & Chair Jack Seiler. “Having the incredible support of AutoNation as we gear up to host four Florida-based teams for the first time in Orange Bowl Classic history is very significant and should make for an exceptional doubleheader.”

The Seminoles, whose coach Leonard Hamilton is the winningest in Florida State history with 378 victories in 19 seasons, will play UCF and sixth-year head coach Johnny Dawkins, who led the Knights to their first NCAA Tournament victory in just his third season. The Gators, whose head coach Mike White has secured 123 victories through his first six years at the helm and is now the third-winningest coach in Florida history, will take on South Florida, guided by fourth-year head coach Brian Gregory, who led his team last season to the AAC Tournament quarterfinals for the first time since 2016.

The Florida State Seminoles return to the Classic for the 12th time (9-2 record) after another thrilling run to the Sweet 16 in the NCAA Tournament and a No. 10 finish in the final Coaches Poll of the 2020-21 season. The Seminoles are one of just three programs in the nation (also Michigan and Gonzaga) that have advanced to the Sweet 16 in each of the last three NCAA Tournaments. Florida State returns key players Anthony Polite (10.1 pgg) and Malik Osborne (5.9 ppg) in addition to welcoming one of the nation’s top recruiting classes.

The UCF Knights will be making their second appearance in the Classic and first since their 2010 win over the Miami Hurricanes behind an MVP performance by Marcus Jordan, son of NBA Hall of Famer Michael Jordan. The UCF-FSU contest is a rematch of last year’s regular season game in which the Knights upset the 15th-ranked Seminoles 86-74 in Tallahassee. UCF is poised to return it’s third-leading scorer Darin Green Jr. (11.3 ppg) and AAC All-Freshman Team standout Isaiah Adams (9.9 ppg).

The Florida Gators, who will be making their 22nd appearance in the Classic with a 17-4 all-time record, are fresh off a fourth-straight NCAA Tournament bid in which they became one of just six teams (along with Florida State, Gonzaga, Kansas, Michigan and Villanova) in the country with at least one win in every NCAA Tournament since 2017. Florida led the SEC last season in field goal percentage (.464), 3-point field goal percentage (.357) and free throw percentage (.755) and look to return its fourth-leading scorer in senior guard Tyree Appleby(11.3 ppg) while welcoming a number of transfers, including Penn State’s top scorer Myreon Jones (15.3 ppg).

The South Florida Bulls, out of the American Athletic Conference, will be making their third appearance in the AutoNation Orange Bowl Basketball Classic. USF enters the 2021-22 season welcoming in five Division I transfers, one junior college transfer and incoming freshman Trey Moss, a two-time Florida Class 7A All-State selection, to join last year’s AAC All-Freshman player Caleb Murphy (8.3 ppg, 23.8 minutes per game). One of the top recruits in Florida, Moss posted 17.1 points per game and finished his high school career as the school’s all-time leader in points (1,443), rebounds (678), assists (542), steals (155) and three-point field goals (201).

About the Orange Bowl

The Orange Bowl is a 380-member, primarily-volunteer non-profit sports organization that promotes and serves the South Florida community. With its primary mission since being created in 1935 to bring tourism to South Florida through an annual football game and events, it has also maintained a legacy of charitable contributions and community outreach. Orange Bowl community outreach efforts are comprised of four pillars: Youth Sports, Education, Community Engagement and Legacy Programs. The Orange Bowl features a year-round schedule of events culminating with the College Football Playoff Semifinal at the Capital One Orange Bowl on Dec. 31, 2021. For more information on the 2021 Orange Bowl events, including promotional inquiries and volunteer opportunities through the Ambassador Program presented by Panera Bread, log on to orangebowl.org or follow @OrangeBowl on social media.

Home to the Florida Panthers Hockey Club and leading international concerts and events, the Broward County-owned FLA Live Arena is one of the top ranked venues of its kind in the world, servicing Broward, Collier, Miami-Dade, Monroe and Palm Beach Counties and beyond. FLA Live Arena has recently earned the global benchmark WELL Building Institute (IWBI)'s WELL Health-Safety Rating for Facility Operations and Management. For the latest info about upcoming events, visit www.flalivearena.com and follow FLA Live Arena on Twitter, Instagram and Facebook. 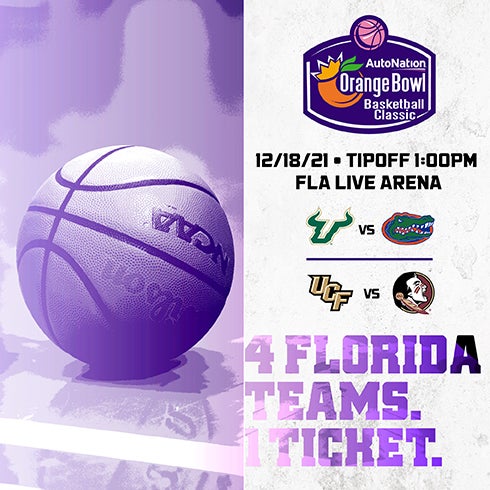